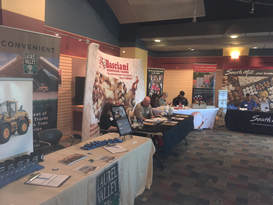 
​The group was formed following a tour of our region by Congressman Lloyd Smucker. A stop on the tour was at a mushroom farm located in West Grove, where 20+ growers met with the Congressman. During the meeting, discussion for more than 30 minutes revolved solely around the labor crisis, which caused many of us to realize something needed to be done. The severe scarcity of labor in the mushroom industry is causing growers to lose business to the tune of one day per week and more, and leaving an employment gap in one of Chester County's most important industries.

The Southern Chester County Chamber hosted the region's first job fair of its kind at their headquarters in West Grove, Pa., to fill a diverse range of mushroom industry jobs, including machine operators, supervisors, packers and administrative roles. This pilot program brought in more than 50 job applicants from around the county and beyond. Employers were arranged in attractive booths that included samples of mushrooms, literature, and representatives equipped to fill open positions. The representatives met with job applicants of all skill levels, many of which offered benefits and flexible hours.

In an ongoing effort to build awareness about the severity of the labor crisis, as well as to diminish negative perceptions about the industry, Doug Doerfler (WSFS Bank), Chairman of the Community & Government Relations Committee and member of the Southern Chester County Mushroom/AG Labor Crisis Task Force, was interviewed by Comcast Newsmakers.

​To learn more about this important initiative, please contact ckuhn@scccc.com.